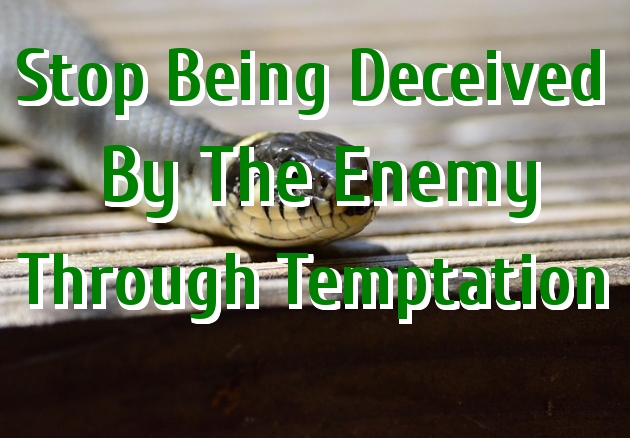 From a biblical standpoint, temptation is based entirely on lies and deceptions of Satan. It’s something intended primarily to twist our viewpoints, our emotions, along with our feelings regarding things that are way off limit irrespective of how abhorrent they are to God. Although, temptation can be quite powerful and impulsive, but it’s not sufficient all by itself to drag us into sin without our own consent. That’s where we’re accountable to God regarding the poor choices that we’re making.

It’s important to realize that we have a God-given free will that is way more powerful than any temptations that we can ever face. To put it another way, our free will is above the temptations that we’re struggling with. The problem lies with how we view and respond to temptation. Our approach in dealing with temptation will decide whether we will succumb or resist it. To sum everything up, it’s a matter of choice.

Since temptation thrives on deceptions and lies of Satan who is known as the father of lies (John 8:44), so the best way to confront it is from a purely biblical perspective. That’s where discernment is so critical. Keep in mind, we have a natural tendency to do evil due to our sinful nature.

As a result, men are more prone to fall into the traps of the enemy instead of allowing their lives to be led by the Word of God. We also have a tendency to let our lives to be governed by our human feelings and emotions rather than principles. The point is that how we choose to deal with the things that are entering our minds is also of great importance.

First, We Have to Pay Close Attention to Our Thoughts.

As humans, we tend to be very picky when it comes to how we deal with certain thoughts that have the potential to drive us into sin. What do I mean by saying that? There are certain sinful activities that we have no desire for; in other words, sinful lifestyles that we’re completely repulsed by.

The same thing also applies even to unsaved people. Consequently, when these things come up into our thinking, we reject them right away. We don’t grant them any chance to settle into our minds by not giving them any consideration. Besides, we don’t give them a second thought also. Our immediate reaction against these thoughts have enabled us to build up a very strong defense system in our minds in order to fend off the very things that we’re repulsed by.

On the other hand, when it comes down to the very things that we are opened to, we purposely choose to tolerate them into our thinking, especially our favorite sins. We even place ourselves into risky situations where we’re thinking about how far we can go without falling into sin. That’s how we end up losing the battle big time with temptation. The reason is that when we deliberately choose to embrace things that should be rejected instantly, it doesn’t merely stop there.

It starts affecting our ways of thinking tremendously. Because these thoughts that we’re cherishing have the potential to defile our minds as well as altering our thought process. During the process, our minds will start converting things that are evil in the sight of God into something that’s acceptable. As a result, our defense system is lowered to the extent these things can go through and settle into our minds very easily. Things that we know firsthand that we should not do are the very things that we’re contemplating.

Our minds then start drifting away from what God has commanded us to do in response to what we’re tempted about to what we’re planning on. Then our brains start releasing chemicals into our body that generate some kind of craving toward what we’re tempted about. Shorty after that, we make up our minds regarding acting accordingly. The problem is that once we’ve made up our minds, it’s very difficult for us to turn back. Nothing can really make us change our minds at that stage.

We Should Stop Allowing Satan to Fool us Through Temptation.

Upon carefully examining this scripture above, we can clearly see that the entire focus is placed upon man. This verse plainly describes the entire temptation’s process, but we need to bear in mind that Satan is the one who is behind every temptation. He is known as the tempter according to (Matthew 4:3); in other words, he is the author of every temptation. What this verse is clearly telling us is that we have a responsibility that we must assume because the devil cannot make us do anything unless we’re willing to do it.

The enemy will try to unleash his field of temptation on us by exploiting our human weaknesses, but we have to choose to act accordingly in order for us to actually fall into temptation. Consequently, we fall into temptations as a result of bad choices that we make regardless of how much truth we know about the Word of God. Sadly, in many cases, we allow the enemy to completely run down our lives through that means to the extent we become useless to God.

We keep on doing the same thing repeatedly even though we’ve never been satisfied until we’re completely trapped. Bear in mind, when Satan is tempting you through an area, it’s pretty much the same schemes that he’s been using all along he will use.

Since you know your life quite well, you can always foresee how the process will take place in the future, especially if you’ve been battling habitual sin. It’s pretty much the same types of feelings you’ll experience. Moreover, it’s the same old excuses that will pop up into your mind when planning on giving in.

Some of the excuses go like that, “I’ll have enough time to repent, God will forgive me, I have no choice but to give in to release the intense pressure being placed on me, I’ll do it only this time by making sure that it doesn’t happen next time…”

Therefore, we’re commanded by the Word to resist him (James 4:7). The reason that we fall is because of allowing what can be fulfilled by succumbing to temptation to become the driving force that drags us into this thing. When we’re tempted we only think of it in the context of what can be achieved in terms of pleasing ourselves. If we want to resist temptation we have to do it the other way around, we have to allow the Word of God to become the driving force that holds us back firmly from giving in. Temptation must be dealt with swiftly in order to avoid further implications down the road.

Keep in mind, if we can’t deal with it now, it’s very likely we won’t be able to deal with it next time. We’ll pretty much come up with the same types of lame excuses that we normally use in order to yield into what we’ve been indulging in all along. The best way to deal with temptation is to confront the current one right away by not following it. Many erroneous and misleading mindsets have to be rejected as well because we tend to think that we’ll always get another chance from God despite of how many chances that He has given us to take the matter in hand by repenting of our sin. It’s worthwhile to think a little bit where we would have been had Jesus responded to temptation as we usually do as the sacrificial lamb of God who would cleanse our sins.

Lastly, because we fell doesn’t automatically mean that God wasn’t there to help us not to fall. Nevertheless, it’s because of a terrible choice that we made by willfully ignoring God’s completely out of the picture. We purposely behave that way with the intent of getting things our own ways instead of His. God has made us such a powerful promise that we can always rely on when we’re tempted. He says that He will always be with us all throughout the temptation’s process in order to keep us from falling into sin (1 Corinthians 10:13). It’s time that we draw a line in the sand that we’ll stop allowing the enemy to play game with us in that particular domain.