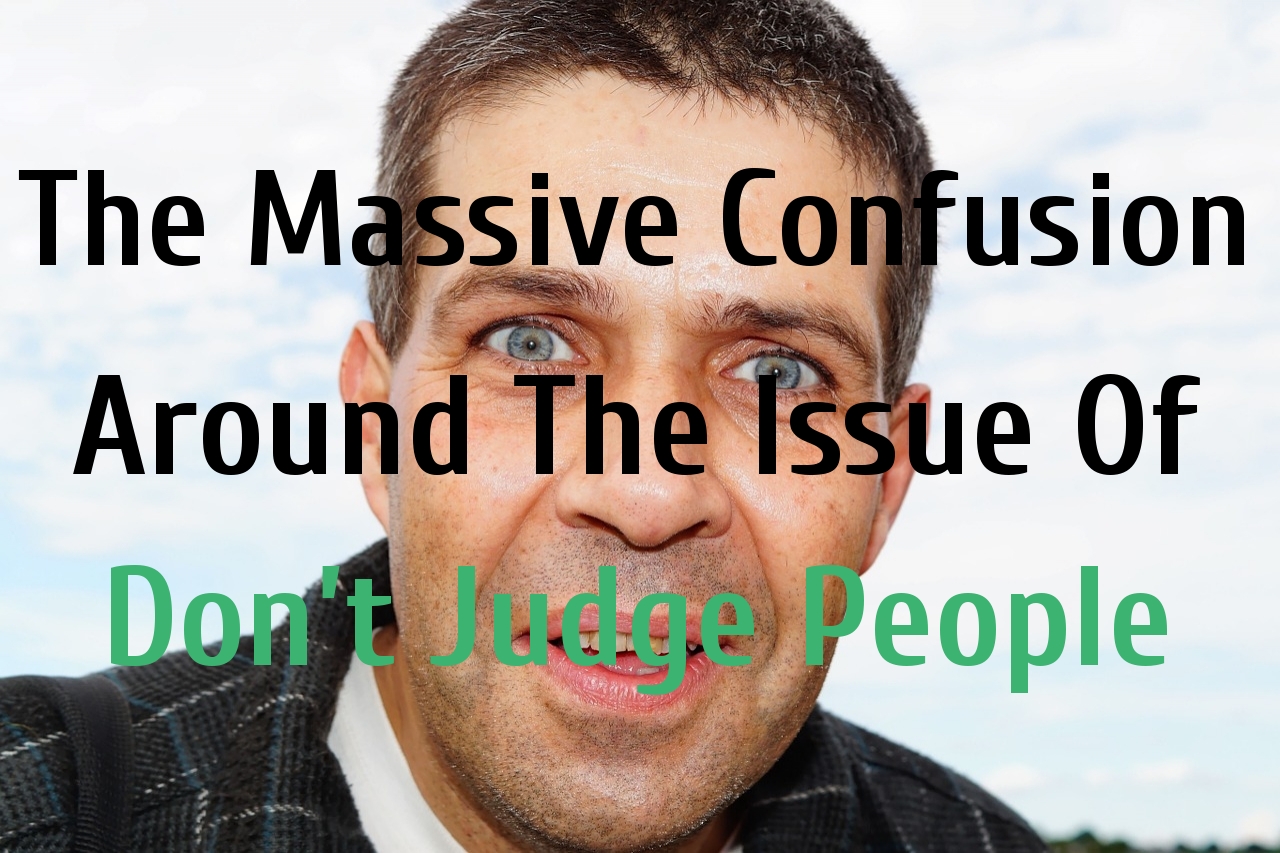 We’re currently living in an age in which people who are indulging in all types of inconceivable sins don’t want to be told that what they’re practicing are sinful to God. They don’t want to admit the fact that they are sinners in the sight of a holy and righteous God. Many would rather go the violent way as a means to defend their sinful lifestyles. Unsurprisingly, that’s just the normal tendency of people who’ve given themselves over completely to sinful behaviors. First thing to remember is that the foremost reason as to why people have chosen to continue to indulge in sin is because of allowing the deceptive pleasures of sins to hijack their God-given conscience.

It means that the moment that people fall in that terrible state, it won’t be easy for them to acknowledge they’re living in sin. They’ve already been deceived, so they’ll simply react accordingly. All that confusion hinges on the negative impacts sin inflicts on people. Sin clouds people’s judgement by crippling their ability to both think and decide wisely. The main reason that people have problems with the truth is because they want to be able to engage into something sinful without feeling any sense of guilt.

How People Have Misused The Statement of “Don’t Judge” Made By Christ.

How do we as Christians look at that issue in the light of the great commission that we’ve been entrusted with by Christ? First, we have also a God-given responsibility for us to stand for the truth with respect to everything that God has condemned as abomination in His sight. Our job in serving God is to allow His Spirit to empower us to develop God’s own character, which means that we should love what He loves and hate what He hates.

In a rapidly decaying world loaded with all kinds of deceptions along with confusions, standing for the truth will not be welcome by those who are of this world since they want to live their lives away from the truth. Unfortunately, people who belong to this world tend to grasp critical issues in a totally different way regardless of the eternal implications they have. What we’re witnessing in such perilous time is that whenever someone has taken a bold biblical stance against something sinful, it sends people into a panic mode.

In their constant unwillingness to deal with their sins, their normal reaction is to use “don’t judge” as an excuse. The Scriptures they are more likely to quote are found in (Luke 6:37, Matthew 7:1). These are their favorite Scripture verses in their desperate attempts to cover up their sins. This is quite hypocritical by nature, isn’t it? How can you use the Word of God that has already condemned your chosen lifestyles as sinful while you don’t even want that Word to be anywhere in your life?

The Reason Why Taking a Biblical Stance Against Sinful Lifestyles Cannot Be Classified as us Christians Passing Judgement on Others.

In order to effectively deal with that issue, we need to take a thorough look at why Jesus actually made that statement, what was going on at that time, and what that statement was all about. According to the accounts of the gospel books, the Pharisees, the scribes, and the Jewish leaders had set themselves up as divine judges and the final court, and they we’re rendering their own personal judgement on people just as if they were God.

They were very prideful and arrogant when it comes down to how they deal with other people. The big problem had to do with the fact they had a bad habit of passing final judgment just on anybody who wasn’t living up to their own self-righteousness standard. Passing critical judgement on others had become their way of showing their own superiority to others, especially the Pharisees. The motto for the Pharisees was that they were not like other people (Luke 18:11).

Having said that, they were highly hypocritical in their ways due to the fact they were teaching the law while not applying it in their lives. So the whole 23rd chapter of the book of Matthew is dedicated to confront their hypocrisy. Let’s take a look at (Matthew 23:2-5) in order for us to take a much thorough look at what Jesus had to say in response to their erratic behaviors.

Then Jesus said to the crowds and to His disciples: “The teachers of the law and the Pharisees sit in Moses’ seat. So you must be careful to do everything they tell you. But do not do what they do, for they do not practice what they preach. They tie up heavy, cumbersome loads and put them on other people’s shoulders, but they themselves are not willing to lift a finger to move them. Everything they do is done for people to see (Matthew 23:2-5)

Even if there’s a question of timing between both the 7th chapter of Matthew in which Christ made that statement about judging others found in (Matthew 7:1) and the 23rd chapter, but that’s pretty much the ways of the Scribes, the Pharisees, and the Jewish leaders. Jesus had been confronting the Pharisees and the teachers of the law about their self-righteousness standard since in the very beginning of His earthly ministries (Matthew 5:20). They falsely believed that they were righteous before God by holding unto their own legalistic traditions while their lives were filled with sins.

The reasons that Jesus made the statement found in (Matthew 7:1) was to condemn the hypocritical behaviors of the Pharisees, the scribes, and the Jewish leaders, and to warn them about the danger of divine judgement as a result of usurping the place of God in the sense of judging others. In this case, it’s not that hard for us to realize that judging others on the ground of our own self-righteousness standard, for the sake of showing that we’re superior to others, or in the context of rendering final verdict on others is sinful to God. But, it doesn’t mean we’re not supposed to evaluate others.

But at the same time, if we happen to take a biblical stance against something sinful by doing that in a helpful and selfless manner, meaning that we totally take ourselves out of the picture by pointing people to what God says in His Word, then there’s no need to be concerned about being falsely accused of being judgmental. Because by doing that in such fashion, we’re not the one passing judgement on others; instead it’s God judging people because we’re simply telling them what God thinks about their sinful behaviors.

We shouldn’t let people use this verse in order to intimidate us. The bottom line is that the Word is given not to be confined somewhere that’s out of people’s reach, meaning that the Word that will determine people’s eternity must be proclaimed whether they like it or not. Furthermore, God will judge people in accordance with what’s written in His Word.

Whenever we’re proclaiming the Word to others by telling them what God says about certain issues that are in clear violation with His Word, what we’re doing is allowing ourselves to become a means through which God can speak to them about their sinfulness to Him.

Bear in mind, the Christian life is a life that’s built completely upon humility. Therefore, if we let that to become the core foundation of our relationship with God through Christ, it’s inconceivable that we’ll ever engage in irresponsible behaviors intended to express our own superiority to others. The main reason has to do with the fact that we were just as wicked as they are before we come to Christ, even worse.

The Clear Approach That Can be Used in Order to Confront Sinful Lifestyles in The Light of The Word of God.

As believers in Christ, we have to do our very best to become opportunist for Christ because there’s a lot at stake. Every time that there’s an open opportunity that comes up for us to stand for Christ in the context of telling others the truth, we must be willing to seize it with a sense of urgency.

We have to embrace a much better approach when dealing with sensitive sinful issues that can be offensive to many. Having said that, the point is that it’s not how offended people feel that matters, it’s how offended God feels as a result of their constant rebellion against Him. We have to present the truth to them in a loving, compassionate, gracious, and merciful fashion. Our responsibility shouldn’t be limited only to exposing the sin problem that many are struggling with but to offer the remedy by pointing them to Christ.

We’re currently living in a time and age where God’s love that’s being extended to those in the world by our willingness to tell them the truth is viewed as hatred, bigotry, and intolerance. As mentioned above, the world’s natural tendency is to look at biblical issues in complete reverse.

Based on their own belief system, the only way they think that we can somehow demonstrate that we love them is by affirming their sinful behaviors. In other words, they want us to appease them in their own sin by making them feel comfortable. While the truth is that it’s a recipe for eternal catastrophe.

Sadly, the truth that can save them just because it’s not in agreement with what they want to do is considered as hatred. On the other hand, the lies of Satan meant to rob them of their eternity is considered as love. Finally, our boldness in Christ can only be shown by our willingness to live out the truth that we know and by our courage not to let sinful people’s offenses to become an impediment that keeps us from telling them the truth lovingly and constructively.