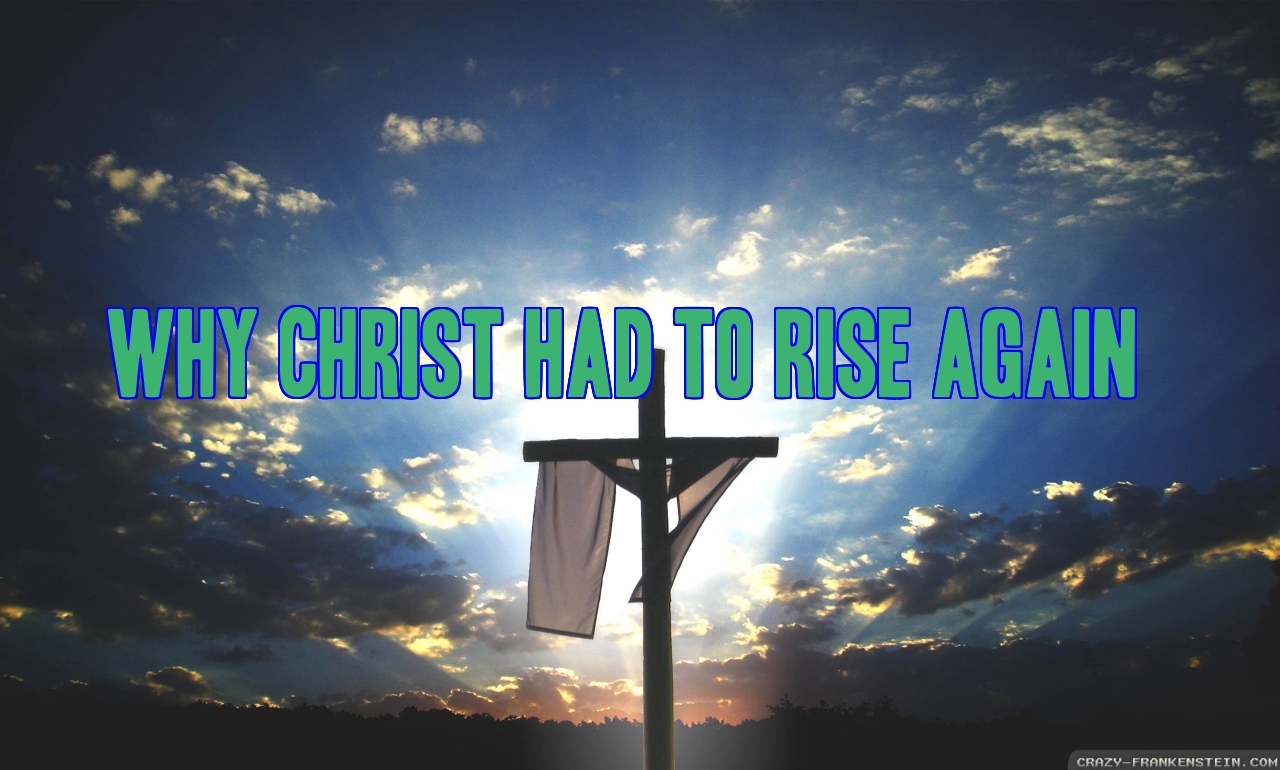 Christ’s death is one the major events that took place during the history of humanity that’s often talked about a lot because of its overwhelming importance, especially in the Christians circles. While there’s no word that can express fully how important Christ’s death is, but His resurrection is far more important than His death.

Perhaps, that bold statement might shock you to the core. Christ’s resurrection is truly what authenticates His death along with all the claims that He made about Himself.

His resurrection is literally what gives life to all the promises that He made about Himself during His earthly ministry. Considering this, we’re saved through faith alone in the resurrected Christ in relation to His atonement.

The Basics Of How God Operates

Before we proceed with this teaching, we’ll take into consideration how God Himself operates. No matter what God wants to fulfill, there must be an agent behind it who’s actively working to bring it toward fulfillment.

The agent through whom God carries out His will is His only Son by the power of the Holy Spirit. First of all, salvation comes from God through Christ and applied to us by the Holy Spirit.

When God promises something, the promise is made through His Son Christ Jesus, which is the Word, and what He says is backed up by His infinite power manifested through the person of the Holy Spirit (Zechariah 4:6).

Christ came and laid down His life in order to save men from their sins, and salvation wasn’t intended to occur in the dying Christ but rather in the resurrected Christ.

Jesus had so many powerful things that He had to say about Himself prior to His death and some of them came as sheer shock to many. The boldness of His claims was quite stunning to many and exacerbated the hostility and animosity that surrounded Him during His earthly ministries (John 10:30-33; John 8:58).

Ironically, people’s misunderstanding of Him as God also revealed His true identity. The claims that He made were connected to whom He’s always been as well as His actual role in the New Covenant that was about to be established through Him.

Jesus’ Resurrection Through The Lens Of His Promises

First, let’s analyze these Scripture verses below to get a clear idea as to why His resurrection had to happen:

Jesus answered, “I am the way and the truth and the life. No one comes to the Father except through Me (John 14:6).

Then Jesus declared, I am the bread of life. Whoever comes to Me will never go hungry, and whoever believes in Me will never be thirsty (John 6:35).

Jesus said to her, “I am the resurrection and the life. The one who believes in Me will live, even though they die; and whoever lives by believing in Me will never die. Do you believe this?” (John 11:25-26)

Well, after reading these verses, it’s obvious that Jesus had to be resurrected in order to reinforce His bold claims. Had He not risen again, there would have been a huge void within the Word of God.

As a result, the Word could have no longer been infallible. Christ would have made a fool out of Himself by making all those claims while certainly knowing that He wasn’t even going to be there in order to reinforce them.

There would have been no hope and future for humanity as well. What about all the prophecies in the Old Testament about Him reigning as King of kings and Lord of lords during the Millennium period?

This is a post-resurrection event that will take place after the 7 years tribulation. He would not have been there in order to serve as a Mediator between both God and us (Hebrews 9:15).

His death would have been in vain due the fact that Christ is actually fulfilling His promises on the basis of His death through the means of His resurrection.

Now, let’s go again and take a look at a couple of verses found in 1 Corinthians chapter 15.

But if Christ has not been raised, then our preaching is in vain, and your faith is in vain (1 Corinthians 15:14).

But if Christ has not been raised, your faith is empty; you are still in your sins (1 Corinthians 15:17).

Without Christ being resurrected, where would our faith be placed? We become acceptable, righteous, holy, and worthy before God through Christ; therefore, we would have still been in the unacceptable condition we’d been had Christ not risen again.

Consequently, there would be no salvation. Satan would have won his greatest victory on humanity after the fall of men.

Instead of Satan being defeated at the cross, Christ would have been. To add a sense of humor to that, it also means Satan would have used that defeat in order to mock God and hunanity.

Because Christ as the Son of God and also being God in every way willingly choose to perish Himself as a result of humanity’s sin while fully knowing that His death would have literally served no purpose.

How foolish would that be?

The death and resurrection of Christ should be seen in the context of that verse found in (Jeremiah 1:12) in which God states that He’s watching over His Word in order to make sure it comes to pass as decreed.

To use that verse out of its original context, the same statement also applies equally to Christ’s death in the light of His resurrection. Christ is watching over His excruciatingly painful death along with His promises in order to ensure that their intended purposes are fulfilled in the lives of those who’ve accepted Him as Savior and Lord.

If there would be no resurrection, then there was absolutely no reason for Christ to have come and laid down His life in the first place. Lastly, Christ’s resurrection is what gives believers authority and freedom over the forces of evil, which had been reigning over their lives.